Royal Race Report: Guillermo on Cheering at the NYC Half

CHRC Royals don’t just love to run, we love to cheer on our teammates because we’ve all had that experience of struggling through a race and being lifted up and recharged by friends who’ve come out to cheer for us. Here’s Guillermo Jimenez’s ecstatic report on the “cheerer’s high” he got from cheering at the NYC Half Marathon:

It was a beautiful early spring morning. At 38 degrees, it would have been perfect for racing, but it was a bit cold to be standing around. I figured I would do my recovery run and get warmed up by running from my apartment to Dekalb Ave. As I left my apartment at 6:55am, I saw lots of runners making their way to the start. I felt a bit envious. As I ran past Grand Army Plaza, a police officer nicely informed me that the start was the other way. I gently smiled and replied that I was not racing but was instead heading to help set up a cheer spot. I was the second person to arrive. Amanda had already set up the table. All we needed was the banner. As we set up, we saw some November Project folks. I joined their tribe workouts once and they are awesome people. Unlike me, lots CHRCers are November Project regulars, so they knew about us. We offered to join forces. As both CHRC and NP members started to arrive and runners made their way to Manhattan, the party started. I would normally be too cold standing around, but the energy from both runners and spectators was so warm and contagious that I did not feel the cold.

I saw lots of familiar faces from previous races, Strava friends, and teammates. I tried and failed miserably to take some pictures. It is hard to cheer and take pictures at the same time. My plan was to cheer until 8:15am at the first cheer spot and then take the Q train to mile 12 in Manhattan. I have raced the half marathon more than any other distance, and for me the hardest mile is always mile 11. At that stage, you are hungry, tired, and your legs hurt. In my case, people start to pass me. Miles 11-13 feel like never-ending miles. When I see someone at mile 11 or 12, it always gives me that extra push to finish with a smile and I wanted to give that to my friends.

As I reached my planned location, I saw the 1:25 pace group. This made me smile because on 2018, I ran past them on the Manhattan Bridge. (Of course I had started too fast and killed my legs early in that race, but that’s another story). I put on my banana suit and began cheering non- stop. Gideon joined me shortly afterwards and the Banana Cheer Squad was in action. This brought back memories from the 2017 NYC Marathon, where Gideon and I ran side by side wearing banana regalia for the first 13 miles. Groups came and went. People came to cheer on their loved ones and left. We often asked for their runner friends’ names and chanted the names along with them. Some groups stayed longer than others as they had multiple runners on the course. One lady asked me, “Which runners are yours?” My immediate response was Crown Heights, but right away, I corrected myself and said, “Well, not really. I’m not only here for Crown Heights. I’M HERE FOR ALL RUNNERS, so basically ALL OF THEM ARE OURS!” She had been really quiet and kept to herself before that, but after my response, she began to cheer on all runners just like Gideon and me. As the race was in its final stages, we saw Zoe and we screamed our hearts out. She came running over to us, eager to high-five us. We wrapped it up a few minutes afterwards, filled with something I would describe as a runner’s high. We didn’t race, but nonetheless we were happy to witness people push through barriers and give them a smile, even if just for a few seconds. I would say it was a cheerer’s high. If you have yet to come out and cheer for the duration of a whole race, please do so. You’ll definitely love it. I know I did. You may get a sore throat, but the cheerer’s high is worth it! 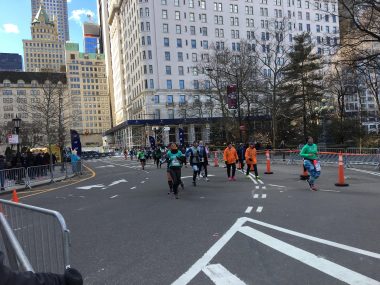 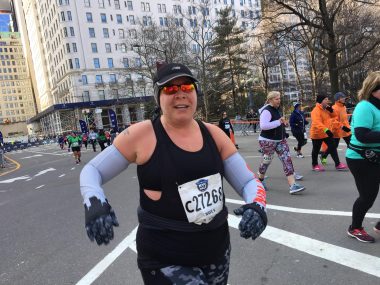