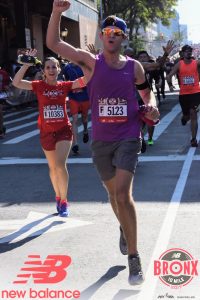 Why do you run?

The reason I run? Years ago I sprained one ankle and broke the other, and after that I did nothing. Absolutely no activity, I just never put the effort in to fully recover and became a bit of a blob. Then, I moved in with Anna and she ran all the time, mainly in the mornings. Unfortunately, this would wake me up and I just couldn’t fall back asleep. So eventually I decided I might as well just get up with her, try this out, and have a productive morning rather than lying in bed.

I started with the Couch to 5K plan and got moving. By the end, I was pretty proud of myself for doing something I didn’t imagine I’d be doing. It was just a 5K, but at the time it was a marathon. At first I enjoyed the fitness and energy that came from running. Now I really enjoy getting out and running to places with Anna, and the sense of accomplishment every time I run a race better, further, and faster. It also makes me feel better about my weekends when I just bum around ;-).

What’s your favorite thing about running?

My favorite thing about running is when I run when traveling, more specifically, being able to truly discover new cities. Races in other places are fun, but just getting out, seeing a town or city in the early hours, going down streets and through landscapes I might not normally pay attention to, and seeing things just by running there myself is generally my favorite thing that has come from running. It’s pretty crazy how far you can go on your feet. It’s great to take a whole place in and live in that moment.

Why did you join CHRC?

The reason I sought out CHRC is to meet people in the neighborhood and make some new friends to hang out with. I moved to Brooklyn over the summer and I loved the neighborhood, but many people I know are not casually close to just spontaneously hang out as often as I’d like and enjoy Brooklyn with me. So now I’m meeting people at runs and at meet ups and look forward to getting to know everyone more.

What’s been your favorite CHRC run/event/activity and why?

It’s going to sound cliché, but the new member run in January was great. Not only was it a nice day out, but it was also the squirrel run which added some extra intrigue to the run, especially when we went on the trails in Prospect Park where I don’t normally run. But most of all, we ended up at Berg’n and had time after the run to hang out, which was a good time.

What’s something you love to do when you’re not running?

When I’m not running, I’d say you can typically find me buried in a comic book; I’m a bit of a Marvel comics addict at the moment. If not there, I’m trying to be creative in some way. Whether it’s searching for inspiration at a gallery / museum with Anna or trying to let out my creativity through photography (aspiring) or cooking a new type of food. I’m just always trying to be around something interesting and new. But if people just want to hang out and chill, I’m all for a board game and some friendly competition.