Jessie Lever Taylor on Coming Back from Injury 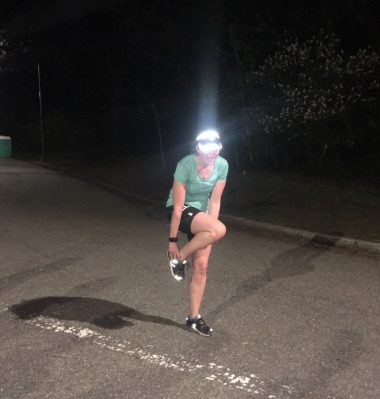 One of the worst things about being injured is the good advice other runners give you – after you’ve injured yourself. If only they’d given it before. I’m hoping this piece might provide more timely advice, highlight some very bad decisions I made, and prevent others from getting injured.

I’m a very goal-oriented individual. After a graphic on Strava showed me I’d run over 20 miles for 7 weeks, I became fixated on running at least 20 miles a week. I didn’t listen to my body even though my right foot was becoming increasingly sore. I ran on through pain because I thought I was just being soft if I stopped. I topped all of this off by actually limping to the start of a 5k just because I’d paid to do it and didn’t want to pull out.

Once I was injured, my decision-making did not improve. I did rest my foot and do exercises until it was no longer painful when I walked. Helpful members of CHRC suggested that I recover by using the rule of twos. Go for a very short run (I started at 10 minutes). If it doesn’t hurt, then increase your next run by two minutes. If at any point it hurts, reduce by two minutes. Never run on two consecutive days (you need time to see if there is any pain). This went well until I got up to 20 minutes. I foolishly decided that I was obviously completely recovered and started longer runs again. I had signed up for my first-ever half marathon and was determined to do it. Every missed training run felt like a disaster, so I was desperate to get running longer distances again.

The result? You’ve probably guessed. Another injury – though in a different place this time. I guess I was running with an odd awkward gait in an attempt to protect my incompletely healed tendon. One of my toes took the brunt of it and I developed a stress fracture. Needless to say I missed the half marathon I’d rushed back to train for, and another after that!

Among other things I’d done wrong was to forget that when you are in your 30s stuff just doesn’t heal as quickly as it did when you were 20.

Fracture eventually mended, I was all set to suffer my next injury. I was back doing short runs, meticulously using the rule of twos. One day, my left shoelace came undone, once and then again. I did it up and ran on. Outside of the Brooklyn Museum, it exasperatingly came undone a third time. I reached down, yanked my shoelace as hard as I could, did it up super tight, and completed my run. A few minutes later I had a lot of pain on the top of my left foot. Dr Google diagnosed me with an injured tendon in the top of my foot because of too much pressure from my shoelace.

This was the final straw. Not only was I injured again, but it was the most ridiculous injury. I had injured myself by tying my shoelace too tight! Now back to that advice that comes too late… I reluctantly admitted my injury to a few other runners. They had one of two responses. Either “Oh I had no idea you could injure yourself that way” or “Oh yeah, that’s why I use the bunny hop method”. What? Wait! There’s an actual shoe-tying method to prevent this? If you don’t already use this method, then I thoroughly recommend you Google it and start!

I have now been back running for nearly 5 months. For the first couple of months, I expected every run to end in an injury but I used the rule of twos until I was up to a 42-minute run, my pre-injury mileage. I have only signed up for a few races this year, as I don’t want the pressure to train. I just want to enjoy running again. I am slowly regaining confidence in my body. My only goal for 2018 is to not get injured. I’m listening to my body and not running when I have the slightest twinge and I am tying my shoelaces with the bunny hop method. If anyone else has any other injury related advice, now would be a great time to tell me!