Amanda Crain on the Cheer Squad

Running through the CHRC Cheer Station in Brooklyn during the 2018 TCS New York City Marathon gave me a boost that’s hard to put into words. For miles after the cheer station, I thought back to all of the screams, high fives, and excited cheering that was coming from all of my friends at the Cheer Station. I get goosebumps today just thinking about that moment, and how it really helped to carry me through that race. For me, it was a special enough moment to have stuck with me through today, and to have stuck with me while I was making a transition in my life after that marathon. 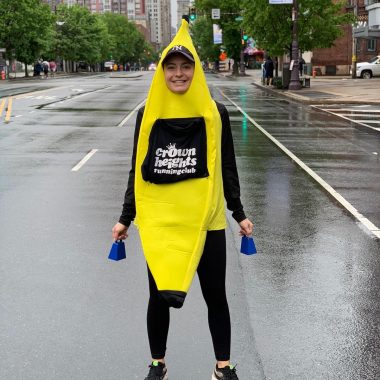 Let’s back up here. I had decided that the 2018 marathon season was going to be my season. I’d been trying for almost 8 years to sub-4 in the marathon, and I wanted this to be my year. I had the support of my CHRC teammates, my training partner Liz, and the great Coach Nate, and I wanted to get it done. And as it turns out, the support system that CHRC helped to put into place for me really was the secret sauce; I went sub-4 not once, but twice that year, within six weeks of each other. And although in NYC I had the CHRC physical cheer station, when I ran Berlin six weeks earlier, I had the incredible virtual cheer station of all of my teammates back home, some of whom woke up at an ungodly hour to wish me luck and congratulate me. The power of this club, and the support of an excellent cheer station, both IRL and virtual, is very real.

I knew that after my 2018 marathons, I had to take a break from running. My body was giving me signs that it needed a break, and I had some health concerns that I needed to address during 2019. However, I hated the idea of giving up my Friday Fives, my Saturday Long Runs, my Speed Sessions at Bed Stuy Flyers, and all of the friendships that I had developed since joining the club. So, I turned to cheering, the other side of running. The club had given so much to me, and I wanted to give back to the club by trying to grow the cheer community that we had.

During the first half of this year, I’ve had such a blast supporting the team from the sidelines. Seeing everyone’s smiling (or maybe struggling) faces come around a curve in Central Park, being able to give someone a little boost to carry across the finish line, or standing out on Flatbush Avenue for the NYC Half or Ocean Parkway for the Brooklyn Half with a chorus of cowbells tracking teammates coming by, it’s all been an amazing experience. Even riding the subway up with the team, giving them a bit of energy (since hey, I don’t have to save mine for running), talking through pace plans, hydration strategies, and discussing each hill of the course, it’s all the stuff us runners love to do, and we can continue to share those experiences together. 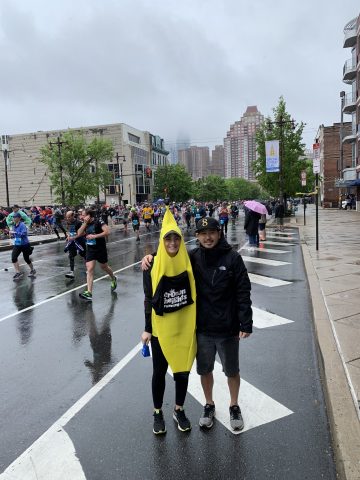 We even took the cheer station out of town, setting up shop at the Broad Street Run 10-Miler, where I was the lone banana cheering on a rainy, cold day. Searching the crowds for the CHRC uniform, getting ready to take a video of a friend crushing his or her race, having a banana to banana moment, it can all make several hours go by in a flash. Not to mention, when you are dressed up like a banana on the sideline of a course, you get a whole lot of comments, smiles, shouts, and sometimes confused looks. It’s a good time.

Convinced yet? Come out and join a cheer station if you aren’t running a race. It’s a great way to spend a morning and to feel engaged in the community! Still not convinced? How about this: you can always count on Jessie to bring an excellent snack selection! And now, also thanks to Jessie, we have a super snazzy and official CHRC banner, which makes us easy to spot.

On a personal note, remember those health issues that I discussed earlier? I wanted to share that I’m doing great now, I’m back to running a little bit, and Tony and I are expecting our first child in December 2019! We hope to continue to support the club and one day bring baby Crain/Lee to cheer everyone on at a race!